English subtitled: You can find out all kinds of things in german exhibitions. Above all, however, one learns something about the German self-image and historical consciousness. The gibberish about a “zero hour”¹ and the many German victims 75 years after liberation is disconcerting. If the same work had been put into the clarification and reappraisal of the fascist crimes, much would have been gained.

[Disclaimer: in the following Text we are writing about the Street “Mohren-Gasse” in Ulm. The german term “Mohr” is racist and colonialist, so we shorten it and the alley with M. and M.-Lane. Also please note that english is not our native language, please excuse our errors and strange sentences structure]

Today an open letter was published, which was initiated by the Green Youth Ulm/Neu-Ulm. They call for a renaming of the M.-Gasse in Ulm. We have co-signed it.

Since summer 2019 the M.-Gasse is a much discussed topic in the city of Ulm. In this debate, various statements made by the CDU, the Mayor and the Mayor of Culture showed something that we have been criticizing time and again for years:

The city of Ulm is desperately trying to build up an image as an international city, but there is often a lack of expertise and willingness to deal with real existing discrimination.

For us this was clearly visible in the flopped image film in October 2019 or the racist attack in Schaffnerstraße in August 2019, which was committed by an employee of the city of Ulm. To this day, the city remains silent about the employment relationship and the announced critical discussion about the film never happend.

We don’t want to go into the subject of M.-Gasse here, the open letter stands for itself. 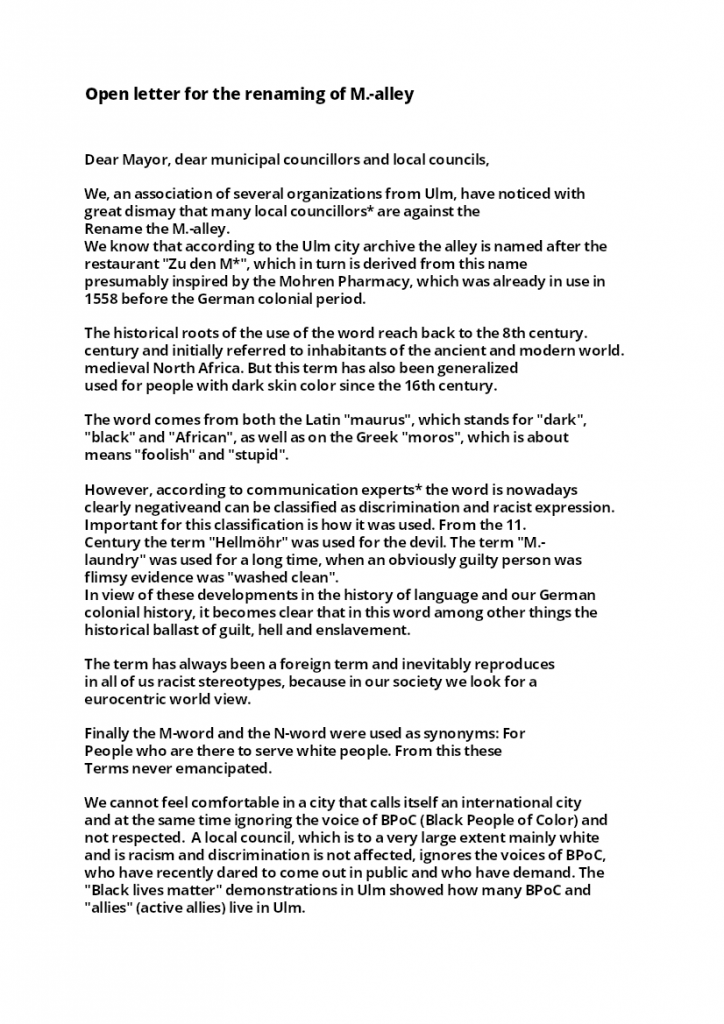 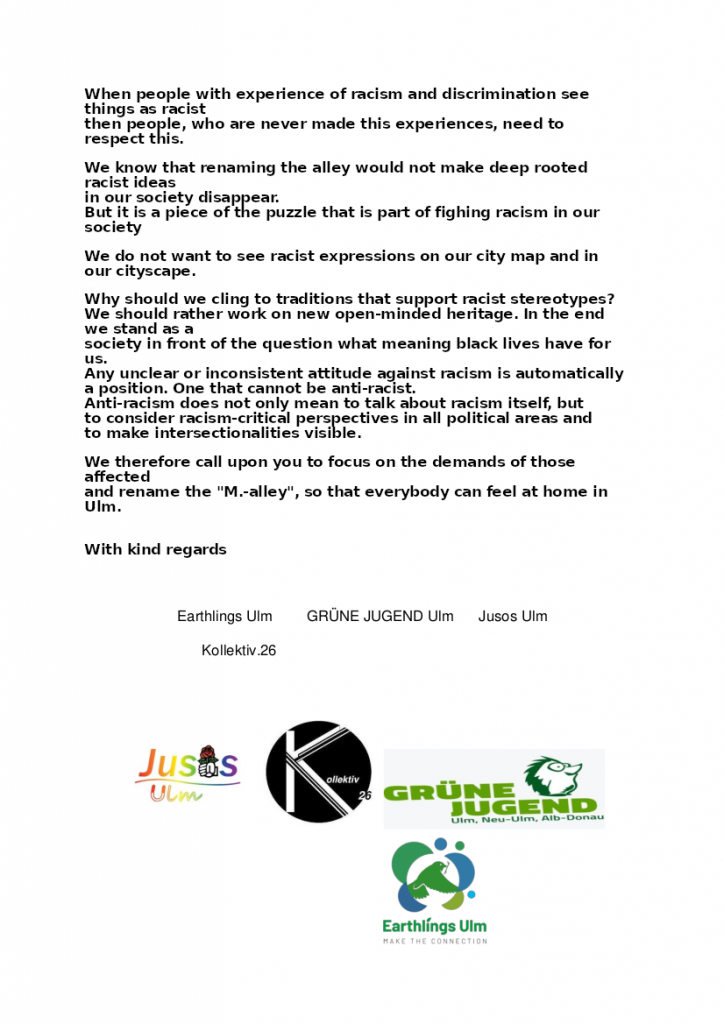 It is more important to us, to emphasize the voices of the People of Color who have expressed their opinions on this topic:

What bothers us is that this whole debate gives the impression that this is a new topic. If you do a little research, you will find out, that more than a decade ago there were already debates about racist places and names. Especially in 2004, when, among other things, the renaming of M.-Straße was demanded in Berlin and the symbol of Sarotti was changed.

There are books such as “Afrika and the german Language” by Susan Arndt from 2004, in which the origin and meaning of racist terms are presented in detail. In this book, several definitions of the term M. clearly show the negative connotation and colonialist origin. Susan Arndt comes to the following conclusion:

We agree with this and it is clear to us, that the street must be renamed. The suggestion by the city to leave the name as ist is and to put up an additional sign with explaning text, is not sufficient. It is a rotten compromise that ignores the needs of black people.

Either Way that would not be the end of the issue of racism or racism in the cityscape. There are other monuments, streets and stores in Ulm we should talk about. And we must not only talk about places in an abstract way. Racism affects people, in the here and now.

If we seriously want to fight racism we have to listen to the people concerned, talk to them and not about them and support them.

[disclaimer: english is not our native language, please excuse our errors and strange sentences structure]

Together with 15 other groups, unions and organizations, we have today published a statement for a solidarity-based city community and against right-wing ideas and conspiracy myths: 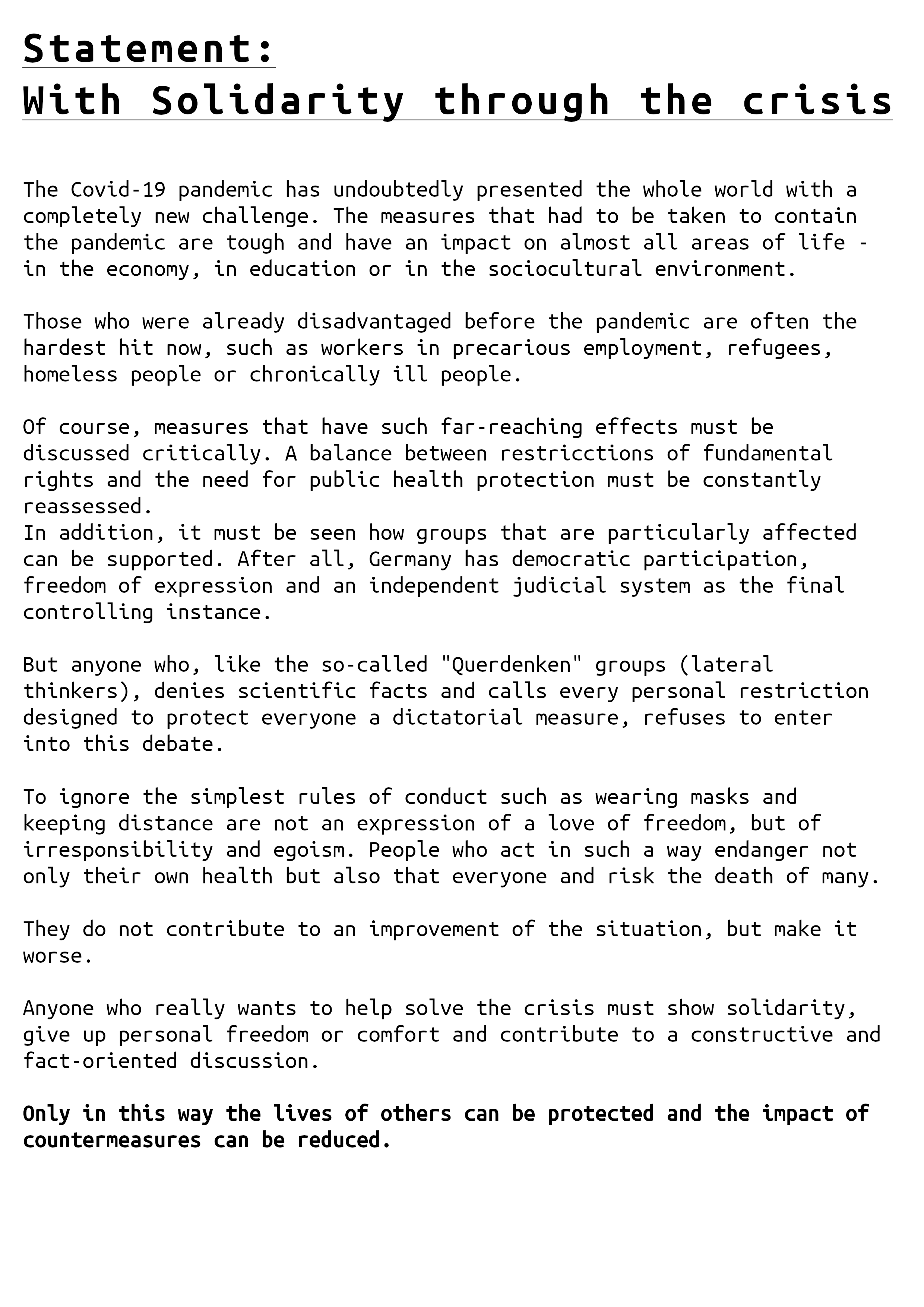 At the beginning of June we had already organized a rally with several other groups where we criticized different aspects of measures and their effects. Much of this is still true in our eyes.

Solidarity can be many things in these times. Starting with your own circle of friends to neighborhood help or support for people who are particularly affected, there are many possibilities.

Be attentive, pay attention to the people around you and support each other.